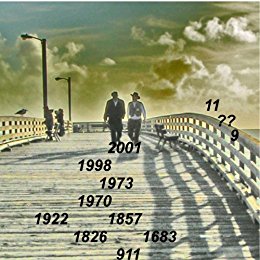 Nine Elevens (How many elevens? Nine!) is a trail of events that took place on a particular month/day. Nodes in the trail reflect critical historical events reaching back to the tenth century and our fictional date of 9/11/911 and the beginning of the novel. I have dedicated this book to the Maya people whom I came to love more the more I researched them. The Maya twice grew societies that at their time were the most advanced in the world. Today and since the arrival of the Spanish conquistadors in the late fifteenth century the Maya have been virtual slaves on their own land. What degrading of these people was not accomplished by the Spanish was accomplished by the US and its corporations such as The United Fruit Company.

Here’s to your advancement in critical thinking and the world of information about the world you are living in that will be at work in your brain making sense of it all and make you a more fit voyager of Mass Extinction Six. ME6 is your real what and where. Many scientists opine humanity will not survive ME6. Some say humanity could disappear as early as a decade from now.

For a more ample description click here but don’t get lost. Come right back.